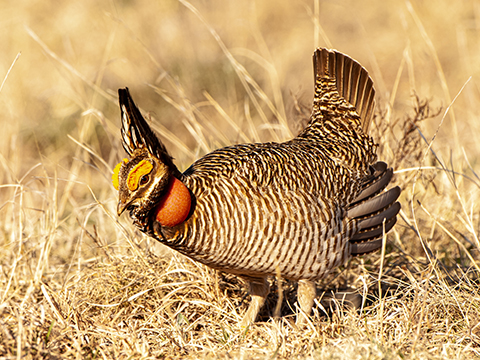 On June 1, 2021, the U.S. Fish and Wildlife Service (FWS), published in the Federal Register a proposal to list two (2) Distinct Population Segments (DPS) of the lesser prairie-chicken (LEPC) under the Endangered Species Act (ESA).

This is not the first effort to list the LPEC by the FWS.  The LEPC was proposed as a candidate species in June 1998 with a threat status of moderate.   The threat status was upgraded to high in December 2008. In December 2012, FWS published a proposed rule to list the LPEC as threatened throughout its range and subsequently published the final rule listing the LEPC as threatened under the ESA in April 2014. Shortly thereafter, the listing was challenged and was vacated by the United States District Court for the Western District of Texas in September 2015.  The FWS published a final rule delisting the LEPC in July 2016.

Here we are again, what is different?

As stated in the listing, the FWS is identifying two (2) DPS.  The DPS are associated with specific ecoregion habitats that satisfy the “markedly separate” condition of the FWS DPS policy. The Northern DPS, consisting of the Sand Sagebrush, Mixed Grass, and the Short Grass/Conservation Reserve Program (CRP) Ecoregions, covering populations in the northern Panhandle of Texas, Oklahoma, Kansas, and Colorado. The Southern DPS consists of the Shinnery Oak Ecoregion with LPC populations in West Texas and New Mexico.  The FWS’ review determined Southern DPS is currently in danger of extinction and would be listed as endangered.  The FWS review determined the Northern DPS likely to become in danger of extinction within the foreseeable future and would be listed as threatened with a 4(d) rule prohibiting take from most activities.

What does this mean?

ESA broadly defines “take” to include both direct (i.e., to harass, harm, pursue, wound, kill, capture, etc.) and indirect effects of actions (i.e., modification or degradation of the species’ habitat). The indirect effects that would apply to oil and gas, and  renewable energy projects creating a more complex, costly and time-consuming permitting process.  These industries will need to  initiate and implement greater effort into the siting and execution of their projects.

Any ESA listing will give additional protection to the LEPC, in particular on Federal Lands.  In addition, ESA listing for the LEPC could potentially create a federal nexus on private lands.

There are exceptions in the proposal to the “take” language.  The 4(d) rule would allow any direct or indirect “take” of the bird associated with “the continuation of routine agricultural practices or the implementation of prescribed fire.”

The FWS is soliciting comments regarding this listing and the designations.  Comments are due before August 2, 2021.  [The rulemaking docket number is FWS-R2-ES-2021-0015.]  The FWS will review all comments and render a listing decision.  The decision process may take as much as 12 months.  Once FWS makes a decision, it is likely to be met with legal challenges either from the industry or environmentalists.  This saga is far from over.  To quote Yogi Berra “It's like deja vu, all over again.”